From Aleppo to Lyon area

NAJEL has specialized for over twenty five years in organic cosmetic products made with olive oil and bay laurel oil. NAJEL offers beauty care for the whole body, including the famous Aleppo Soap, the ancestor of Marseille Soap.

Although the genuine Aleppo soap is the showcase of the Najel know-how, since 2014, the company has developed a wide range of natural and organic cosmetics made in its own laboratory in Lyon, France.

Since 1895, the Al NAJJAR family has been making authentic Aleppo Soap using traditional knowledge passed down from generation to generation, at its soap factory in the city of Aleppo in the north of Syria.

For the last 20 years, through the craftsmanship of the Al NAJJAR family master soap-makers, NAJEL produces natural and organic cosmetics of the highest quality. 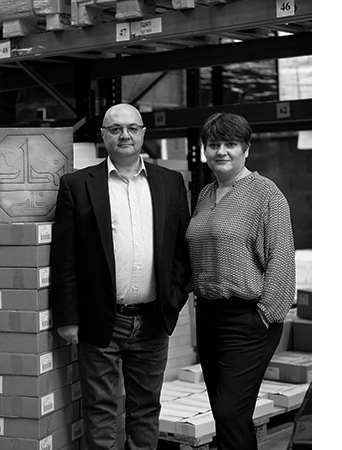 Although NAJEL is renowned for the manufacture of authentic Aleppo soap and organic body care range. Their Franco-Syrian story is a true fairy tale that began more than 20 years ago when Catherine, a law student, and Manar, a young Syrian doctor, decided to get married. NAJEL, a contraction of their two surnames, is the first fruit of their love ...

"NAJEL is the contraction of my name and my wife's name : NAJJAR and ELIA. Besides, in Arabic, “najel” means "the son", it is highly symbolic ! " - Manar NAJJAR

With the support of Manar's family, some of whom stayed in Syria and worked in the historic soap factory, Catherine and her husband decided to market authentic Aleppo soap made from locally produced olive oil and bay laurel oil, in France and abroad. An ancestral know-how that dates back to 1895.

Manar NAJJAR grew up in the family soap factory, discovering soap-making through his grandfather whom he can still see testing the formulation in cooking pots in the kitchen! But ultimately the young Syrian was destined to study medicine. He flew to France to specialize and it was in Lyon that he continued his studies, before practising near Grenoble. It was then that he met his future wife, Catherine. Shortly before the wedding, his father-in-law visited Syria and was amazed to discover the manufacture and the properties of Aleppo Soap. He was enamored and convinced Manar to export this one-of-a-kind product that, at the time, was completely unknown in France. The first container arrived in France in 1996.

Twenty-two years later, they are now completely dedicated to this activity, employing about fifteen people in France and 80 in Syria during the production season and then about twenty the rest of the year and have extended their product range to include natural and organic cosmetic treatments for the face, body and hair.

So Manar and Catherine NAJJAR devoted themselves to the manufacture of this legendary green Aleppo gold from Villeurbanne, in the Lyon area.

In Syria, it is Manar's brother Samer who supervises production, from the harvesting of the olives and bay laurel berries to the drying of the soaps, a process which takes 9 months, in the family soap factory located in the north of Aleppo. Since 2011, and despite the Syrian conflict, the family has been working to continue production. This continuity enables many Syrian families to work and to live.

Aleppo soap is a natural product, made exclusively from olive oil and bay laurel oil, which has been granted a Protected Geographical Indication in Syria.

"Just as genuine Marseille Soap is made in Marseille, so genuine Aleppo Soap can only be made in Aleppo and its region."

As the production of Aleppo Soap is seasonal, the production season from December to March and 20 to 25 people in the low season for logistics and packaging.

How to Exfoliate Your Skin - The Right Way